In her classic story, The Best Christmas Pageant Ever, Barbara Robinson imagines a Nativity play taken over by a town’s worst kids, the Herdmans. But during a rehearsal, readers watch along with the characters as the Herdmans hear the Christmas story with fresh ears. “You would have thought the Christmas story came right out the FBI files,” Robinson writes of the Herdmans, “they got so involved in it—wanted a bloody end to Herod, worried about Mary having her baby in a barn, and called the Wise Men a bunch of dirty spies.”

The Christmas season ends with Epiphany, the Twelfth Day of Christmas. Given that the word epiphany usually means a sudden realization, that name is fitting. We should move on from Christmas as uneasily as Imogene Herdman does: “Her eye [was] just all puffy and swollen. She had walked into the corner of the choir-robe cabinet, in a kind of daze—as if she had just caught onto the idea of God, and the wonder of Christmas.”

The church’s celebration of Epiphany has always aimed to shine a light on the radical expansion of God’s plan of salvation and restoration. If we will receive it, the Epiphany of Jesus the Son promises us not a black eye but healed eyes, along with enough light to see a glimpse of the future kingdom.

02.  I. History and Celebration

In our exploration of Advent, I mentioned that the early church first celebrated the Nativity of Jesus on January 6. Actually, the early Christians celebrated a tapestry of events related to Jesus’ appearing in the world: his birth, the visit of the Magi, the childhood events related in the gospels, and Jesus’ baptism in the Jordan by John. In the fourth century, Nativity came to the East as a kind of gift from the Western church; the East reciprocated with Epiphany. Its importance really can’t be understated, though non-liturgical Protestant churches have largely lost the thread of a Christmas season beyond Christmas. A few popular reminders of it remain–most notably in the Christmas song “The Twelve Days of Christmas.” It’s worth noting, in passing, that the season includes a couple other commemorations, several of which are tragic. The Feast of St. Stephen, the first martyr, is mentioned in the traditional carol “Good King Wenceslas”. Childermas, or the Feast of the Holy Innocents, commemorates the children slain by Herod’s decree. And as happens so often, East and West look at the events of epiphany almost as one would a work of art, noticing different emphases from their respective stances.

Western churches know Epiphany primarily as a celebration of the Magi or Wise Men visiting the Holy Family from the East (Matthew 2:1-12). Though Nativity plays and displays conflate Matthew 2 with Luke 2, the Magi likely came to a house in Nazareth rather than the Bethlehem stable. (Among other evidence, Herod orders the deaths of all children under two years old). But the focus of this visit is clear: God has shined the light of salvation beyond Israel to the Gentiles, first as a guiding star to the Magi, and then in the Son himself, whom John calls “the Light of the World.”

The magi were probably Persian philosopher-magicians. Early Christian iconography pictures them wearing Persian clothing. Western tradition assumes there were three, because of the three named gifts, but Eastern churches sometimes number them at 12. As early as A.D. 500 the magi were named: Caspar, Melchior, and Balthazar. They were unlikely recipients of the news about Jesus.

Epiphany also recalls Jesus’ baptism in the Jordan (Matthew 3:13-17; Mark 1:9-11; Luke 3:21-22; John 1:29-34) and his first miracle, turning water into wine at a wedding (John 2:1-11). I’ll say more about Jesus’ baptism below, but the wedding miracle occupies the Epiphany stage because John uses the language of revelation: “This, the first of his signs, Jesus did at Cana in Galilee, and manifested his glory” (John 2:11).

For the Eastern church, Jesus’ baptism was a central event of Epiphany (or Theophany), and it remained so after the Nativity began to be celebrated on December 25. Three keys explain its centrality. First, consider the event’s significance for Trinitarian theology. Jesus’ baptism is the first biblical event at which all three members of the Trinity are named and present: the Father speaks, the Holy Spirit descends, the Son stands in the water.

Second, consider Jesus’ baptism as the start of his public journey to the Cross. He steps into the Jordan River, moving from relative obscurity into a very public role, one that will put him at odds not only with the Roman occupiers, but also with the spiritual leaders of his own people. St. John Chrysostom wrote:

“Why then is this day called Theophany? Because Christ made Himself known to all — not then when He was born — but then when He was baptised. Until this time He was not known to the people. And that the people did not know Him, Who He was, listen about this to John the Baptist, who says: “Amidst you standeth, Him Whom ye know not of” (Jn.1:26).”Discourse on the Day of the Baptism of Christ.

John’s audience also heard John connect Jesus’ life and ministry to the sacrificial system not as priest but as sacrifice, “the Lamb of God.”

Though he was illiterate, Anthony’s holy life inspired the development of Christian monasticism. Born in Egypt, at about 20 years of age he sold his inheritance and resolved to live in solitude. He was not the first desert monk, but he became the most famous thanks to a biography written by Athanasius in 360. For his contributions to the development of Christian monasticism, Anthony is sometimes called the Father of All Monks. His feast day is January 17.  Read more about Antony at Christian History.

Looking at Epiphany, one might be tempted to choose one major path or the other when it comes to observing Epiphany—East to Jesus’ baptism, or West to the Magi and the wedding at Cana. Or one might choose to dismiss the day entirely! But in doing so, one would miss the opportunity to join Jesus on his many-faceted way—which is the invitation of the church’s calendar, after all. It’s possible to see look at this day as one would look at a diamond, turning it and seeing it catch and throw the Light of the World against the surfaces of our lives.

The church’s ancient teaching sees us in the Magi. Expecting to find a glorious king, the Magi instead found a child of poor laborers, rumored in the community to be a bastard. I’m not sure the weight of Mary and Joseph’s choice has been better illustrated than in the opening moments of Paolo Pasolini’s The Gospel According to St. Matthew. Joseph stares at a clearly pregnant Mary, and walks away. Mary stares after him, her family standing in the door behind her. 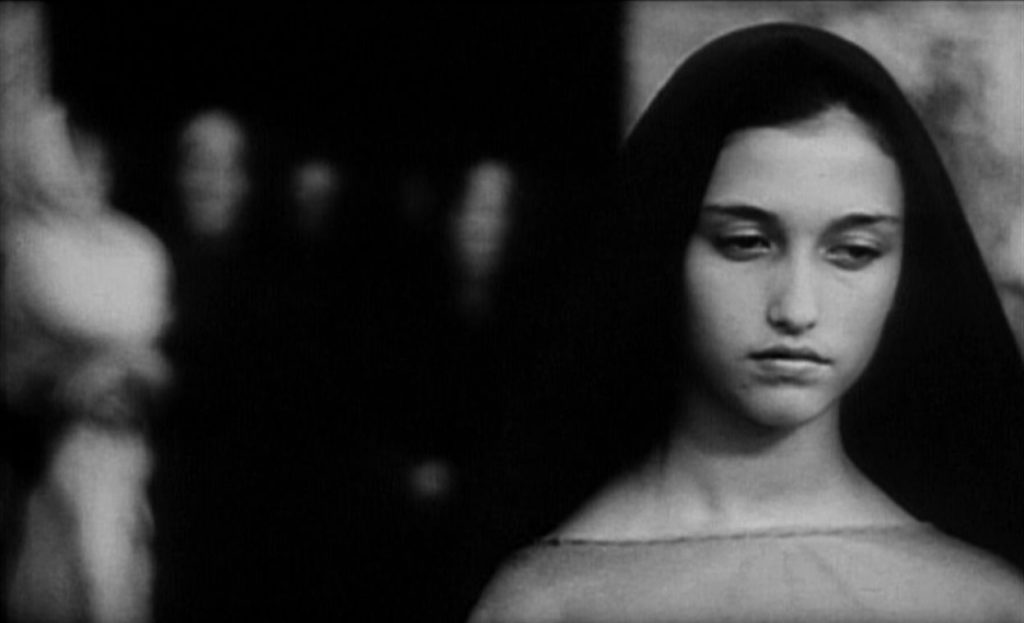 But, as John Chrysostom notes, they have a kind of double vision. “With the eyes of their body they saw one thing,” Chrysostom writes, in his Homily on Epiphany, “another with the eyes of the mind. The lowliness of the assumed Body is before their eyes, yet the glory of the Divinity is not concealed. It is a Child that is adored. And together with it the unspeakable mystery of the divine condescension! That invisible and eternal nature has not disdained, for our sakes, to take to Itself the infirmities of our flesh.”

The Magi face a decision, just as Mary did, just as Joseph did. “And after they had offered their gifts the Magi were warned that they should not return to Herod, and they went back another way into their country. In this they give us an example of virtue and faith, so that we too, having once known and adored Christ our King, and having forsaken the road that we formerly traveled, that is the way of our past errors, and travelling now another road with Christ as Guide, may return to our true country, which is Paradise, from which Adam was driven forth.”

Epiphany, coming as it does at the first of the calendar year, invites us to see Jesus with the eyes of faith, and to allow that vision to shape our actions. After all, we bring our own expectations to our encounter with Jesus. It is tempting to think of the “Christmas Jesus” as all joy, light, and happiness. We may not want to sully him with our grief, darkness, and sadness. But he is able to receive not only the gold and frankincense, all that delights us, but also the myrrh, the suffering and death we endure as we wait for his appearing.

Jesus’ baptism offers us life through obedience and humility. In his baptism, the church fathers saw in Jesus a type of Israel, approaching Canaan through the Jordan. They have also seen there a picture of the new creation, as the Father speaks, the Spirit hovers over the waters (compare Genesis 1), and the Father declares the Sonship of the Word made flesh. And they have seen in Jesus our example, leading us in baptism. The church father Tertullian writes, “But we, little fishes after the example of our [Great] Fish, Jesus Christ, are born in water, nor have we safety any other way than by permanently abiding in water” (Baptism, c. A.D. 203).

But we are also like John, facing unexpected Divinity in his cousin’s face, and realizing that he also needed the message of repentance. He, too, needed to repent and see the Man in front of him with different eyes, what the writer Phillip Yancey calls “grace-healed eyes.” “Behold the Lamb of God,” he cries, “who takes away the sin of the world!” And then note the humility and obedience of each man to God, who gave this moment. John considers himself unworthy to baptize Jesus; Jesus considers his baptism by this humble minister fitting and needful.

Epiphany can be a source of light, each time “the circling year” brings it to us. But as Alexander Schmemann writes, “None of this can be experienced or sensed without repentance, without a deep change of consciousness, without the conversion of mind and heart, without the ability to see everything in a new light. This was precisely the repentance John the Baptist preached and which made it possible to see Jesus approaching the river Jordan and lovingly accept Him as God Himself who from the beginning of time loved the human race and created the whole world for us as an image of His love, eternity and joy.”

Watching for the Light: Advent

Candlemas, or the Presentation of the Lord

How Did the Church Get Two Easters?

The Transfiguration of the Lord

Ascension of the Lord

The Exaltation of the Holy Cross

Waiting with Mary in Advent

The Feast of Feasts