While driving downhill on Bald Peak Road, on the Hillsboro side of this ridge in Oregon, there is a stunning view of Mt. Hood. Nearly 95 miles east and south out of Hood River at an elevation of about 3000 feet, is Lost Lake. She reflects her own view of Mt. Hood, but from that viewpoint it’s a completely different experience.

Recently, Dave (my husband) and I were talking about the mountainous crises affecting people today in response to the COVID-19 virus, violence against black bodies, economic insecurity, and moral disorder in leadership. I had initiated the conversation, but before I got to the point of my storied concern, my body signaled alarm as the space between us cooled. Feeling confused, I stammered—which was just enough space for Dave to press back in disagreement. I struck a pose of quiet courtesy, but I wasn’t really listening.

When Dave checked in with me later, I told him that I had not withdrawn because we disagreed, but because I hadn’t felt heard. Reflecting on our conversation was helpful, not for how we might strengthen our argument, but for noticing the unconscious obstacles that interfered with listening. In this case, we were seeing the same “mountain,” but our viewpoints had started miles apart.

True Listening Resides in our Being

I have two longtime friends with whom I began 20 years ago to shyly practice self-disclosure. What first attracted me to these women was their intelligence and humor. More than that, though, was their first-hand experience of suffering. Their honesty about theirs has helped me to face mine. Rublev’s Icon of the Trinity would be an apt illustration of how they listen to each other and to me. Like the three figures in the painting, they hold a posture of humility, mutuality, love and joy, where each is lifted up and held secure. Each listen with their entire being. 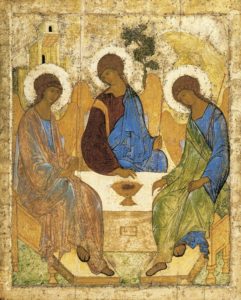 Rublev’s Icon of the Trinity

We three met for lunch in the days when the world was talking about Terry Schiavo. She was a young woman who remained in a persistent vegetative state for nearly 15 years while Terry’s family, doctors, the courts, the president and the pope, argued over her end-of-life and right-to-die. Both of my friends were drawn into Terry’s story because they had each travelled that heartbreaking road with their mothers’ illnesses. Although my friends held diametrically opposing opinions, I was moved by the way each listened to the other’s story with tenderness and respect. Unhurried, unjudging, they listened and moved toward each other with compassion and understanding.

How we listen, and who we are being as we listen and as we speak matters. True listening resides in my being, that is, in the presence that I am. The quality of my listening and the quality of the speaker’s sharing is affected by how each shows up in the moment. In the presence of each other, speaker and listener both—by words spoken however haltingly and words heard with patient open receptivity—create a portal through which a new tone or wiser voice is heard. Douglas Steere wonders:

I have a friend with whom I relish collaborating. Whether we are being the listener or the speaker-who-listens we dance in creativity. There’s a kind of agility and holy synchronicity in which we meet or press against or release into independent turns, that bring us back together in a discovery we neither one would have been able to choreograph on our own.

What listening is, ultimately, is Love: Loving my neighbor and also loving the Eternal Listener who is listening me to life. Douglas Steere writes:

Is it blasphemous to suggest that over the shoulder of the human listener we have been looking at, there is never absent the silent presence of the Eternal Listener, the living God? For in penetrating to what is involved in listening, do we not disclose the thinness of the filament that separates persons listening openly to one another, and that of God intently listening to each soul?2

The human listener who has spent sufficient nights and days and years with The Eternal Listener, who has learned to listen within herself and become acquainted with the hidden landscape of her own interior wilderness, who has cultivated the soil of soul to receive the seeds of humility, compassion, and love, embodies the Incarnating Listener who listens all souls to life.

By holding a space with generosity of heart and mind and without judgement, a listener’s presence can free the most defended from their armaments of anger, fear, and suspicion. Thus, held and heard, perhaps a troubled soul can stop warring with others or simply make peace with themselves. When one listens with her ear and heart attuned to the highest possible Good for all, listening is Love.

Growing up in New York, the Vietnamese-American poet and author Ocean Vuong was surrounded by survivors and storytellers. In an interview with Krista Tippet he said, “… my grandmother and my mother and my aunt would tell stories to make sense of their past. Their stories are carried in the body, and it’s edited each time the person tells it.”3

Whether it is our childhood story, the stories we inherited at family reunions, or the sacred stories of our faith, our stories carry identity and over time reveal truth and meaning. Mark Nepo writes:

It is the telling that heals. When we repeat stories, it’s not because we are forgetful, but because there is too much meaning to digest in one expression. So we keep sharing the story that presses on our heart until we understand it.4

I met my friend Taliilee while visiting her village in Ethiopia. She is a song-writer, speaker, and leader in a cross-cultural ministry. An indigenous oral tradition carries her tribe’s history in song and dance, in ritual and story.

When she first came to Oregon, she was still learning to speak English. Since we could not speak her language, we learned to listen beneath her words to what she couldn’t plainly say. Then slowly, word by word, week by week, we began to know her.

At the age of 5 she was sent from her parents to be a helper to her grandmother. She goaded cattle with a sharp stick, walked a couple miles to fetch the water, and learned how to make injera over a fire. She feared the hyenas would break through the mud walls of the hut to drag her away. And as a 12-year-old, she avoided the marketplace where girls were stolen by men “to be married.”

Here in the states, Taliilee eventually earned her Doctor of Ministry in Global Leadership. I don’t see her as often any more, and over coffee one day I told her that I missed her, that I missed her stories. “My Jean,” she said, “these are not just my stories anymore; you listened and now they are your stories too.”

Yes, they are. Having listened we now have a shared story—not hers or mine, but ours—and by friendship and prayer we stand in solidarity with each other. Of course, it has changed us both. There is an exquisite risk in truly listening, as Mark Nepo points out: “To listen is to lean in softly with a willingness to be changed by what we hear.”5

In the first century, while on trial for his life Stephen did well enough recounting Israel’s history—until he included some facts that confronted and offended those who venerated the law but did not obey it. At that point, the witnesses covered their ears and stopped listening.6

In this century and not for the first time are we confronted by our own national history that includes ongoing injustice and idolatry. I pray that I might stand in solidarity with the prophetic voices and own that that story is mine, is ours. While protests and chaos continue and rising COVID-19 cases have not yet hit their peak, I continue groaning out prayers of lament. And all the while, I am intentionally listening for what the Eternal Listener over my shoulder has been hearing all along. Am I offering listening that is embodied, loving and potentially healing?

Today, as Dave and I consult different news sources, the bewildering viewpoints feel miles apart. For the vulnerable to feel heard, we will need to lean in with openness, to notice and name the unconscious obstacles that interfere with our listening. As we climb this mountain of crises, may the next chapter in our story record our listening one another into discovery and into more just and loving ways to structure our laws and our lives.

“I want to be fully present to this next person.”

For one day, hold this desire as a mantra and intention. When you notice a distraction or obstacle, take a breath and renew your intention.

Listen to all parts in this Listening for Change series

Listening to Our Stories